If you're shopping for a new dulcimer, you have a few things to consider beyond the instrument.

Hammers are a very personal choice, perhaps even more personal than the dulcimer itself. Most duclimers come with hammers, and you might like the ones you get just fine. But in one of the instrument's great ironies, few people seem to like both dulcimer and hammers from the same builder.

Hammers can be either single-sided or double-sided, the latter usually having cloth or leather on one side of the head for a softer tone. Hammers also come in different lengths, with different size heads and handles, and in a variety of hardwoods. Maple, walnut, and mahogany are all popular hammer woods. Rosewood and ebony are also used by some makers, but they're not commonly favored because of their extra weight.

Experimenting through purchase can be expensive (hammers cost anywhere from $25 to $75 per pair), so see if you can borrow some, and use them in several different settings.

Here's a small sample from my own collection. They're all double-sided with padding on one side (my preference), and each has its own benefits and drawbacks. From left to right, Ed Hale poplar, Ed Hale walnut, Jim Wells maple, Lee Spears maple, Lee Spears ebony, my own attempt in walnut, James Jones maple. 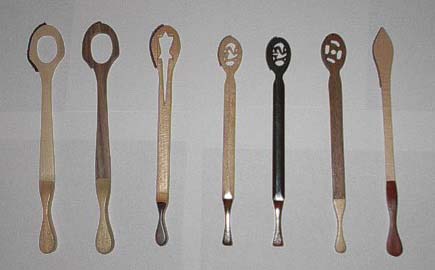 To play the hammered dulcimer, you need to prop it up somehow. Some dulcimers have a screw hole in the back, near the smaller end rail, which accepts a single leg (called a "monopod") which supports the dulcimer off the floor while you rest the wider rail on your lap.

Once you get tired of the dulcimer creasing your lap, however, you're going to want a dulcimer stand. This can be anything that holds the instrument up and in front of you -- some folks even use a snack tray -- but the best thing is something that was built for the task. Stands range from the simplest, non-adjustable stand (about $70) to fully adjustable jobs (about $125-$200), and just about everything in between.

For something completely different, Dusty Strings has a high-tech system called the Tri-Stander (around $265), which has three slip-adjustable aluminum legs and screw mounts that are attached to the bottom of the dulcimer. It's not to everyone's taste, but it makes for a dulcimer that's very hard to tip over.

Finally, if you have a dulcimer with a second screw hole in the middle of the back, you may be able to mount it on a heavy-duty camcorder tripod, but ask the builder first to make sure the dulcimer's back won't cave in.

A tuner is an electronic device that receives a tone and displays a readout of its pitch through a graphic display of LEDs and/or a needle-type meter. A tuner is a must unless you have perfect pitch and a lot of patience. Just make sure you get a chromatic model.

In years past, tuners were fairly expensive, starting at around $60, but newer technology has brought prices down, and some decent models can now be had for as little as $25.

A handy accessory to the tuner is a tuner pickup (about $15), which plugs into the tuner's input socket and clips onto a tuning or hitch pin. This shuts off the tuner's microphone and takes the tone directly from the instrument's vibrations. This prevents extraneous noises from masking the tone, which makes tuning a lot easier.

Here's an assortment of tuners and a tuner pickup. 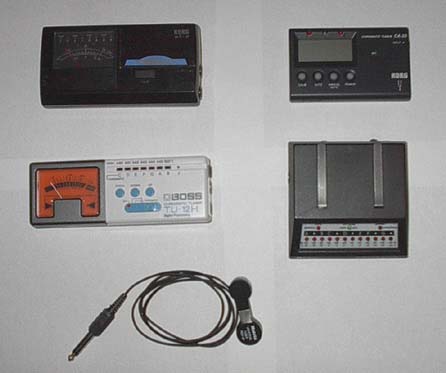 Clockwise, the tuners are:

Unless your dulcimer will never leave the house, a case is important. Although most dulcimer cases are soft, they still provide a lot of protection from bumps and climate changes. If you're buying a used dulcimer, chances are it'll come with a case. Builders don't usually include a case in the price of their new dulcimers, but most builders and retailers have them available starting at around $100.

There are some custom case makers, like Blue Heron Cases, Main Street Case (208 354-8827), and others who will build to suit, and their cases are excellent, but expect to pay $180 or more.

Hard cases are available from Harptone and one or two other makers, but they're also expensive and a lot heavier than soft ones.

If you're going to do any traveling by air, you'll need to make special plans. Most airlines and airports are getting very fussy about what you can carry on the airplane, setting very specific size limits. Most hammered dulcimers are beyond these limits, and so need to travel in the baggage compartment. To ensure the instrument's safety, most traveling musicians invest in an Anvil or some other professional traveling case. They're big, heavy, and expensive ($300 and up), but when you consider the alternative of a damaged dulcimer, they're good insurance.

This is really only necessary if your dulcimer is very heavy and/or you have to carry it any great distances. Then again, luggage carts aren't very expensive ($30 or so), so it's an easy investment. Heavy-duty models work best as they have a wider track and don't tip over so easily.

The only down side to this item is that the dulcimer rests best on one of its end rails making for a very wide load, so you need to be careful going through crowds and doorways.

Some people have fashioned a wheeled carrier that moves along the length of the dulcimer, and a few have even modified one of the three-wheeled baby carriages built for parents who jog. There might even be something like this for sale, so keep your eyes open.